China Labour Bulletin is quoted in the following article. Copyright remains with the original publisher.

Tania Branigan in Suzhou
Friday 7 May 2010 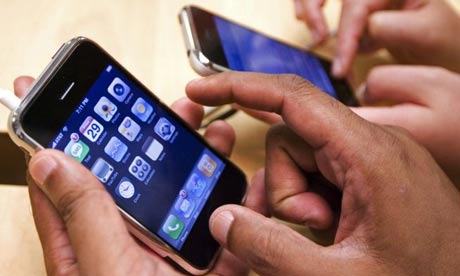 A lawyer acting for 44 of the poisoning victims said several had named Apple. There is no suggestion the firm was responsible for the use of n-hexane. Photograph: AP

Next month, amid the usual hoopla, Apple is expected to officially unveil its latest gadget: the much-awaited iPhone 4G. But halfway round the globe from the company's California headquarters, a young worker who has spent months in an eastern Chinese hospital wants consumers to look beyond the shiny exterior of such gadgets.

"People should know what we do to create these products and what cost we pay," said Bai Bing as she perched on a bed in her ward.

She is one of scores of young workers in the city of Suzhou who were poisoned by the chemical n-hexane, which they say was used to clean Apple components including iPhone touch screens.

Wu Mei – who, like the others, asked the Guardian to use her nickname – recalled her fear as her health suddenly deteriorated last spring.

At first, she thought she was simply tired from the long working hours at Wintek, a Taiwan-owned electronics giant supplying several well-known brands. She was weaker than before and noticed she could not walk so fast.

"Then it became more and more serious. I found it very hard to go upstairs and if I squatted down I didn't have the strength to get up. Later my hands became numb and I lost my balance – I would fall over if someone touched me," she said.

By summer, she was admitted to hospital, where doctors struggled to diagnose the cause. "I was terrified. I feared I might be paralysed and spend the rest of my life in a wheelchair," she said.

Because she was using n-hexane directly, she was one of the first and worst affected.

But more and more workers from the same room were suffering headaches, dizziness and weakness, and pains in their limbs.

An occupational diseases hospital which saw several victims diagnosed the problem in August and Wintek stopped using the chemical. But thanks to the previous months of exposure, at least 62 workers would require medical care. Many spent months in hospital.

Some believe more employees left Wintek after being taken ill, before they realised what was wrong.

Prolonged over-exposure to n-hexane can cause extensive damage to the peripheral nervous system and ultimately the spinal cord, leading to muscular weakness and atrophy and even paralysis, said Paul Whitehead, a toxicology consultant and member of the UK's Royal Society of Chemistry. It can also affect male fertility. Recovery can take a year or more.

The chemical's potential risks are well-known in industry, as are safe exposure limits. But the Wintek manager who decided to switch from alcohol to n-hexane for cleaning – apparently because it dried more quickly – did not assess the dangers. It was used without proper ventilation.

The change was obvious; workers disliked the pungent smell of n-hexane. But they had no idea it might affect their health. "We hadn't even heard of occupational illnesses before," said Wintek worker Xiao Ling.

Asked if they knew what products they were working on, three of the affected Wintek employees said team leaders told them they were working for Apple. They instantly recognised pictures of an iPhone and said they were cleaning touch screens, adding that items for other brands were not affected because Apple had isolated its production line. A lawyer acting for 44 of the poisoning victims also said several had named Apple.

Wintek, which does not discuss its clients, said it had replaced the factory's general manager.

It now notifies workers whose jobs may involve risk in advance, has tightened procedures for the introduction of new chemicals, and carries out medical checks. It has paid medical fees for those affected and says it will pay compensation according to the law.

Given that the assessment and appeals process for compensation can take as long as a decade, lawyers hope the firm will pay quickly as well as fairly.

Other patients at the hospital say they too became sick while using n-hexane on Apple products.

Bai Bing said she and her colleagues were cleaning components including Apple logos – the kind that appear at the bottom of desktop screens – when she fell ill.

Her employer, Yunheng, could not be reached, but work safety officials in Suzhou have said eight employees were poisoned there as they carried out work sub-contracted by another firm, Surtec.

A Surtec employee confirmed that it made Apple logos, but a spokesman said it knew nothing about Yunheng or the poisoning.

Wintek has previously faced questions about its treatment of workers, with disputes in Taiwan and at another plant on the mainland. The Suzhou case only grabbed public attention when lingering concern over the poisoning and anger over unpaid bonuses sparked a mass protest.

Wintek blamed a misunderstanding and said bonuses had been paid and the dispute – like the other conflicts – resolved. It added that it had worked to improve communications with workers.

There is no suggestion that Apple was responsible for the use of n-hexane.

Apple declined to answer questions about the poisonings or about the firms involved, saying it does not reveal who it works with, although its spokeswoman added that Wintek had been "quite proactive" in discussing the issue. Instead it pointed to its code of conduct, which sets strict requirements for working and environmental practices, adding that many suppliers say they are the only customer carrying out such checks.

But the 2010 audit shows that manufacturers are routinely breaching the code. The majority – 54% – broke the 60-hour weekly work limit more than half the time. Another 39% failed to meet occupational injury prevention requirements; 17% failed on chemical exposure standards; and 35% did not meet wage and benefits requirements, with 24 of the 102 factories audited paying less than minimum wage for regular hours.

Three facilities used underage workers and three had falsified records. Apple said it terminated the contract in one of the latter cases, and required suppliers to make improvements and submit to reviews following other breaches.

It has also trained more workers about their rights. The firm argues that publishing the audits provides a level of transparency.

But until it identifies its manufacturers, outsiders have no way of assessing how well its policies are working and what action it is taking to deal with problems such as the n-hexane poisoning.

"Apple is the most paranoid about commercial and product secrecy. That's getting in the way of ensuring workers' rights are protected," says Geoff Crothall of China Labour Bulletin, a Hong Kong-based organisation campaigning for workers' rights.

The US giant – which last month reported quarterly profits of more than $3bn – could afford to monitor factories with serious issues "day in, day out" if it wished, he added.

"Apple products are not cheap and most Apple customers are willing to pay a premium – so why not add a tiny little bit extra to ensure working and environmental standards are met, as well as product quality?" he asked.

In the meantime, while Wintek says most of the poisoned employees have returned to work, at least some are opting to protect themselves by leaving factory life.

"I want to be as far as possible away from chemicals and the electronics plants," said Bai Bing. "I want some job, safe."